Championing the cause of Immunization 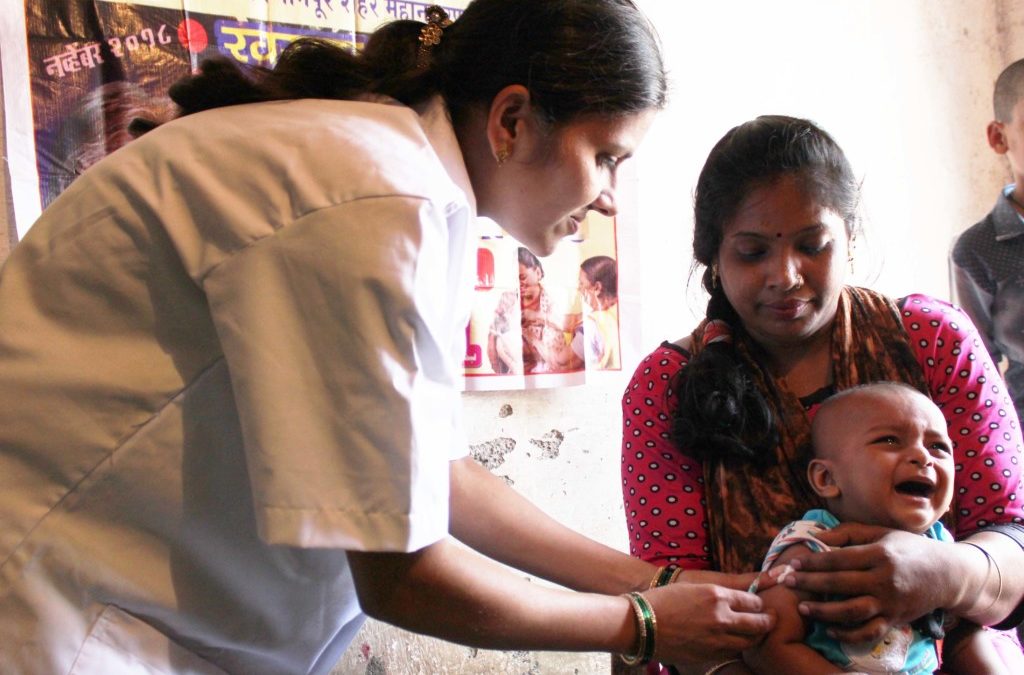 Immunization is widely recognized as one of the world’s most successful and cost-effective health interventions. Not only does vaccination prevent the suffering and death associated with infectious diseases such as diarrhoea, measles, pneumonia, polio and whooping cough, they also enable national priorities like education and economic development to take hold. This World Immunization Week, public health experts emphasized on “Protected Together, Vaccines Work”.

According to WHO, immunization prevents 2-3 million deaths every year, however 5 lakh children still die of diseases, preventable by vaccines, every year in India. In fact, India is home to the highest number of unvaccinated (56%) and incompletely vaccinated children (32%). Low immunization levels among poor and marginalized children compromise gains made in all other areas of maternal and child health.

Thus, to address this issue Government of Maharashtra in 2013 launched Call to Action for child survival in 166 blocks of 19 districts and 2 Municipal Corporations of Bhiwandi and Malegaon in the State. The Municipal Corporation of Bhiwandi was identified as a high priority area. Hence, CCDT in partnership with UNICEF forayed in the most vulnerable and deprived urban poor communities in Bhiwandi to address the health and nutrition issues.

Routine Immunization coverage in the city continues to be less than the state average of Maharashtra. DLHS4 data for key health indicators available for district Thane which includes Bhiwandi town are low.  Full Immunization for children aged 12-23 months has deteriorated from 73.6% to 42.9% during five-year period between 2007-8 (DLHS3) to 2012-13 (DLHS4). Relatively lower up take/poor coverage of immunization and health services, especially institutional deliveries, quality of antenatal care (ANC) and postnatal care (PNC) and poor nutrition are a serious concern. Therefore, CCDT-UNICEF in association with Government of Maharashtra joined hands to address these challenges by leveraging the existing urban health care system (primary health care via health posts).

All the frontline workers, referred to as Community Coordinators (CCs), engaged in the project belong to the same project communities. CCs have a strong community presence which has been leveraged for the Immunisation program in Bhiwandi. They mobilized 80,978 children for Measles and Rubella (MR) campaign out of which 34,302 children were vaccinated for MR. The CCs resolve in converting the 6,475 refusal children who were immunised for MR, led to the MR coverage elevating to 67.76%. CCs attended 573 routine immunization camps in which 4,272 children were referred and 718 refusals were converted for Routine Immunization.

CCs have been consistently trained in inter-personal communication skills. This has enabled them to establish rapport at all the levels and has helped them bring community members under the ambit of health services. Moreover, the project has been systematically reaching out to key community stakeholders like community and religious leaders, thus building a strong rapport with them. The stakeholders who were earlier being sensitized and engaged in spreading the importance of Polio immunization are now being approached as an ally to talk about routine immunization. These stakeholders are providing significant support in increasing the uptake of immunisation in the area. Routine Immunisation coverage for Bhiwandi for children aged 0-5 years is 60.23% while for the booster dose it is 68.39%.